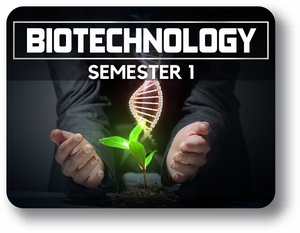 How is technology changing the way we live? Is it possible nature can provide all the answers to some of science’s most pressing concerns? In Biotechnology 1a: Introduction, you’ll learn the basics of biotechnology and evolutionary theory, explore the various ways we store and preserve food, and discover the process of fermentation and microbiology. This course will also cover the importance of breeding plants and hybridization and how early breeding programs led to the study of genetics and an understanding of the function of genes. Finally, you’ll delve into early industrial discoveries and explore the developments in biotechnology during the industrial revolution.

Biotechnology refers to techniques that rely upon living organisms or the products of those organisms to make or modify products, to improve animals or plants, or to develop microorganisms for medical, agricultural, or industrial use. In this unit, you will review the essential foundations for biotechnology, specifically the biology behind biotechnology.

Unit 2: The Beginning of Biotechnology

The first human experiments and work in biotechnology came as humans made the transition from hunting and gathering to an agricultural means of food production. Domestication of plants and animals led to significant changes through active human interference and selection. Changes in human society, including sedentism, would lead to many early innovations in biotechnology.

The first use of biotechnology, as you learned in Unit 2, was to improve the food supply. Biotechnology continued to be used for food production as early peoples learned how to ferment their foods, produce alcohol and vinegar, make cheese, and bake bread. These changes in foods improved the food supply and made it safer, and reduced the risk of food-borne illness.

Modern biotechnology requires an understanding of genetics; however, that understanding is relatively recent. Before biologists, microbiologists, and botanists understood genetics, they learned how to crossbreed plants and produce hybrids of their own creation. In many ways, this built upon the domestication of plants discussed in Unit 2 but was far more complex and innovative.

Unit 5: The Beginning of Genetics

In this unit, you will learn about industrial biotechnology advancements between 1800 and World War II. These innovations required new achievements in microbiology, a new understanding of enzymes and fermentation, as well as the ability to identify bacteria. They fueled industrial growth in various industries, from ammunition production to paints and varnishes, providing key ingredients needed for a growing and changing world.

Food, drugs, the environment—biotechnology is everywhere! The industry is producing life-changing products across the globe and in our lives. Biotech has an effect on the foods we eat, on the drugs that promote healing, and on the products that protect our environment. The future of biotech is bright but comes with a responsibility to safeguard consumers and our environment. This safeguarding responsibility is known as regulation. Regulation is sometimes seen as a negative, but as we’ll see, it actually helps protect us while providing pathways to innovation and change.

The world of biotechnology is an area of science that does not concentrate on just one scientific area. Biotech applications and innovations heal humans and animals. Biotech supports agriculture by increasing crop yields, improving plant life, and preventing damage to our food chain from pests and insects. We even see biotech developing applications to combat climate change through products such as biofuels that use plant-based formulas instead of fossil-based fuel. Biotech is even in our laundry detergents and dishwashing liquids in the form of special enzymes that replace environmentally harmful chemicals!